At first, being asked (trusted) by someone you know to be an executor on their Will can be, in a sense, flattering. It’s a gesture to show the sign of esteem that they hold you in and many of us 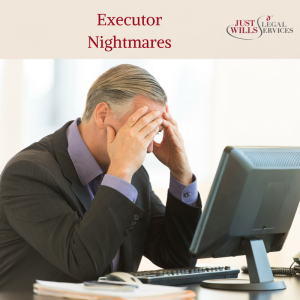 would jump at the offer to let that person know that, of course, you will support them fully when the tough times come.

However, for many named executors the job role isn’t entirely clear. In fact, recent research carried out in 2015 shows that out of the all people who have executed a Will in the past, 17% percent reported that it was “harder than expected” and 12% reported that is was “a complete nightmare”.

An executor of a Will is someone who must first gain the legal right of a grant of probate and then distribute/dispose of the deceased estate in line with the wishes of the Will amongst many other responsibilities such as paying any due IHT and closing off bank accounts/investments.

Many people agree to be named as an executor without considering the weighty (and potentially very costly) legal liability. This liability is not only personal but in fact is unlimited. Also, often more than one executor is named on a Will (you can have up to 4) meaning your legal liability is joint and several. Clearly, this means that you can be held accountable for the other executors’ mistakes and only now do we start to build the picture of just how significant a responsibility being an executor is.

To add to this, you can be held liable for longer than the typical liability period in contract law. In fact, executors are liable for their mistakes for up to 12 years (or 15 if it involves minors!), rather than the standard 6 years. The research conducted in 2015 showed that 43% of people thought that they were no longer liable after having paid the final legacies from the estate of the deceased.

Many nightmare situations can arise when executing the wishes of a Will. Perhaps the deceased had many more private investments or bank accounts than you thought? Have they lost passbooks or proof of rights to their property? Were they simply a hoarder?

It’s advised that before rushing into the decision to become an executor that you should consider whether you are the right person for the job. Many people feel uncomfortable being an executor and also a main beneficiary at the same time. Also, it may be the case that the Will maker is leaving a substantial proportion of his/her estate to extended family, some of whom you may never have met. Maybe you don’t understand taxation and legal services and don’t want to have any part of it?

Often an executor can bite off more than they can chew and it is recommended to draw in professional help if matters complicate or you feel a sense of doubt in what you are doing.

The decision to agree to be an executor for a family member or a friend is often a choice made out of love and support for that individual but can often be made in haste. The consideration of potentially large tax burdens for the executor is often foregone. As the law stands at the moment, an executor must liquidate any estates, pay taxes and bills and then distribute remaining funds/assets to specified beneficiaries. However, HM Revenue and Customs demand that inheritance tax be paid no more than 6 months after the date of death. For many executors, especially those acting alone, this can be a very real and unexpected worry. Large estates take a long time to liquidate, particularly those made up of a range of possessions (property, vehicles, stocks and shares) and if the executor has not been able to complete the task in 6 months, he/she may have to pay the tax bill out of his/her own pocket or worse still, take out a loan. At the moment, there are calls for HM Revenue and Customs to extend the deadline to give executors breathing space in this difficult time before demanding (great) amounts of tax.

Often bringing in legal professionals can cost less than the amount you would be liable for if you make a mistake. Also they bring a neutral and experienced perspective to the table which can be useful in separating emotions and business.

It’s important to add here that although legal professionals can dramatically reduce the risk of mistake or misrepresentation, it is still the executor who will carry the liability. A beneficiary cannot sue a lawyer as there exists no contract with them.

Nowadays, more and more beneficiaries of estates are bringing court cases against executors. Overall the number of cases more than tripled from 2012 to 2013. This is partly due to the increasingly fragmented nature of families but also down to the growing complexity of individuals’ estates and the natural scope for error that arises from this, especially to the layman. Bringing in professional help will help you avoid this trend, which could lump you with more than proportional fines and legal fees.

To, book a free consultation with one of our legal experts across the UK; book online or call 01342 477 102 and quote ‘Executor Nightmares Blog‘.