Stepsisters feud hits the headlines as their claim to Inheritance could rely upon a 20th Century Law. 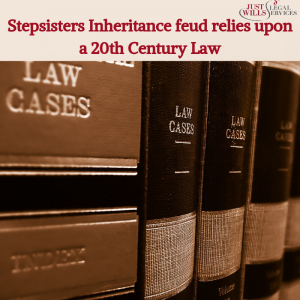 at their home in Leigh-on-Sea in 2016 continues.

The couple died intestate ( without a Will ) so now, in a bid to secure the family Inheritance,  the step-siblings are at war over which of their parents actually died first.

John and Ann Scarle were found by police after a worried neighbour raised the alert in October 2016. The police ruled out foul play and concluded the couple had died from hyperthermia.

As the couple both had children from previous marriages, the inheritance of their estate is not as straight forward as it would be if the siblings were related. If the siblings were the direct offspring of both John and Anne then according to the laws of intestacy the estate would be shared equally between them.

However, in this instance, the daughters are step sisters so which one inherits depends on which parent died last. For instance, if it was the father who died first then his wife would have inherited the first £250,000 of his estate and all his personal possessions whatever value. ( If there are no children then a husband, wife or civil partner can inherit all the deceased assets up to the value of £450,000 ). If thereafter the wife died then her estate is left to her direct descendants.

In this case, proving which of the couple survived the longest is the goal of both the step-siblings, as one of these two would be set to inherit the couple’s home worth £280,000.

Currently, reports are suggesting it is difficult for experts to determine the order of the deaths so, therefore, the court may have to revert to a 20th Century law known as the “Commorientes Rule” meaning simultaneous deaths. Section 184 of the Law of Property Act 1925 states that if two or more family members die and it is not possible to determine who died last then the younger is deemed to have survived the elder.

Both daughters are claiming their parent died last, however in the absence of evidence the daughter of Ann Scarle, Deborah Cutler is relying upon the “legal presumption” that the older of the couple, Mr Scarle, her stepdad died first, so his estate passed to his wife, then when she died the whole estate should pass to her.

This law was introduced during the 2nd world war when a whole family were killed at once during a bombing raid. The House of Lords ruled that in the absence of evidence of who died last then it would be deemed that the youngest would have survived the elder, so the estate would be passed to the youngest and then to their direct decedent’s.

In order for Mr Scarles daughter, Mrs Winter to inherit she would have to prove beyond a reasonable doubt that Mrs Scarle died first, in order to contest the Law of Property Act.

The case is still to conclude.

This is one of many cases we’ve highlighted where this could have been avoided if only a valid Will was in place. If you would like help writing your Will get in touch today.